“Deep in The Forest we Meet” by K.N Patsios in LONDON

The Blender Gallery and Varvara Roza Galleries proudly announce Konstantinos Patsios’ solo exhibition titled “Deep in the forest we meet”. The exhibition runs from 23 of June till 10 of July at Gallery 8, in London. NFTS of all his original artworks will also be available. A catalogue book has been published specifically for this show – the digital version of which can be found here.

The artist will be present at the opening of the exhibition which will take place on the 23rd of June at 6pm. 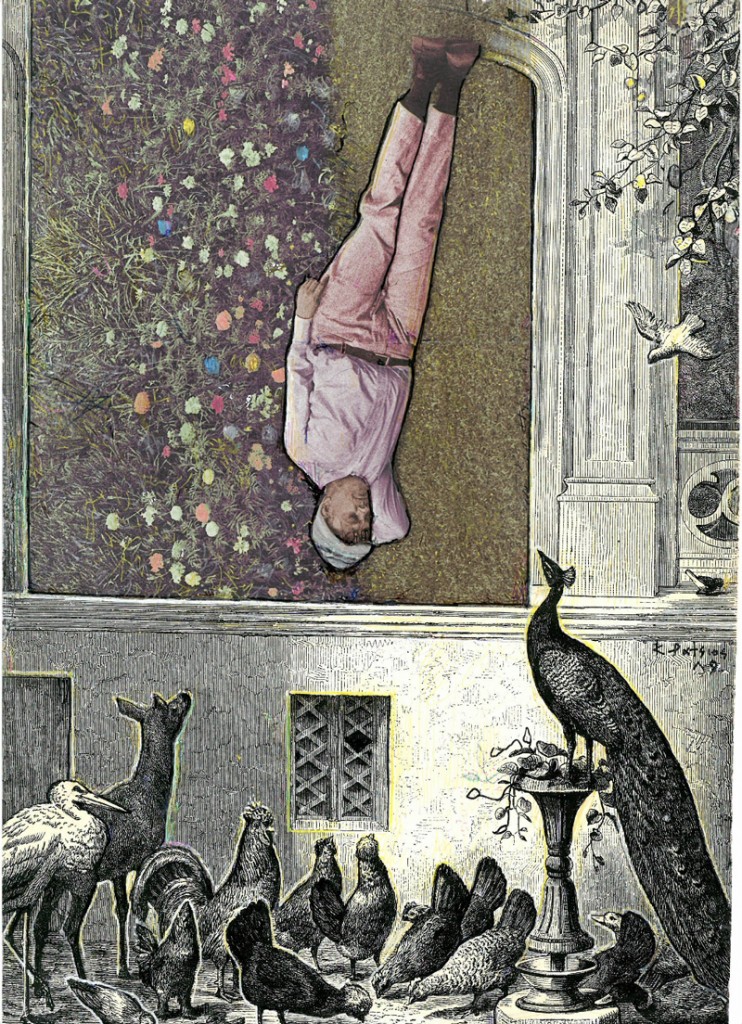 Through a selection of artworks of collage and painting on canvas, Konstantinos Patsios proves that he constantly evolves his expressive dexterity using a multitude of visual styles and references drawn from the history of art, comics, and the contemporary consumerist universe. With sharp narrative compositions that suggest modern palimpsests, he vigorously renders the contemporary deluge of the information of image. His works come from three different periods: experimentation in black, where harsh contrasts are softened by the familiarity of his narrative compositions, often accompanied by political allusions; the shift towards colour and vivid contrasts where colour and collage balance, highlighting their multiple protagonists; and finally, the most deliberately talkative period of comics exploring their relationship – or rivalry- with painting.

The final composition is a long and pre-planned process in Patsios’ work – despite the fact that the element of surprise is always present. Having initially selected and resorted to materials (postcards, posters) that he himself has collected from his personal quests, experiences, and voyages, he then over-paints them, transmutes them and reconstructs them on canvas, thus transforming the painting into a practiced organism. In this way, memory functions both individually and collectively since by reconstructing his own experiences, the artist creates a new narrative that from now on concerns the collective memory; in a manner similar to the mechanism of memory that – at times confused, and at others with clarity that almost reaches obsession – dredges up impressed images into the present, one discovers in Patsios’  images,  fragments,  impressions, colours and messages seemingly disparate, but essentially perfectly homogeneous. 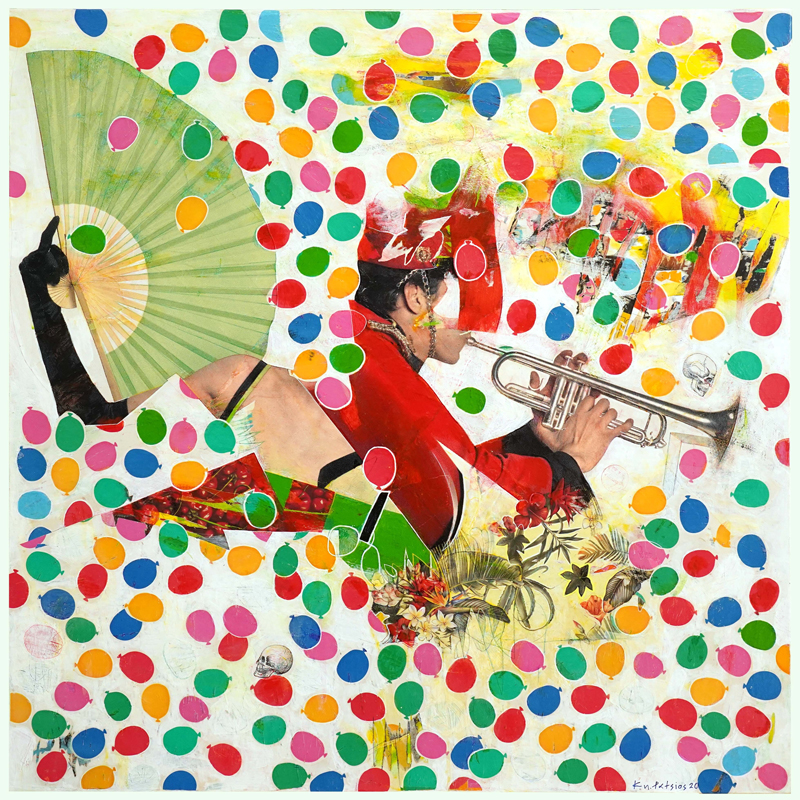 One has often the impression that the aesthetics of the postmodern are still active in the artist’s work, since issues of identity – or multiple identities -, appropriation, or opening of artistic quality to all forms of virtual representation are constantly explored. Through his works one can hear the agony of homogenization expressed by Guy Debord in the Society of the Spectacle where the (shattered) images, sometimes as information or advertising and sometimes as propaganda or a way of direct consumption of entertainment, henceforth belong to the sphere of representation – whose original unity has however gone forever.

The element of challenge is constant , but not obvious as sexuality is explored to the point where we will maintain an attitude of indifference towards the way in which the consumerist society has over-sexualized individuals over time. Nude models – both realistic from photo clippings and abstract (Moralis) – sometimes emerge in the narrative causing the final result, whereas other times they dominate and impose themselves on the image. The way gender has been treated over time in art is of concern in Patsios’ work, as often there is nothing left but small evidence of what was once a gendered body. The portraits he uses indicate a desire to connect with the great tradition of painting. But their glory is gone. Sometimes recognizable, other times intentionally anonymous, they abandon their familiar qualities and coexist with a new – pop culture. Their colours are bold, while they often overlap with the personalities that comprise them. In the paintings, the multiple subjects, gendered, animate or inanimate, do not cover each other and all claim their space. Paraphrasing Roland Barthes, the canvas becomes a multidimensional space where a variety of texts, none of which original, are mixed and yet at conflict with each other. In this way, not only are established idols and hierarchies challenged, but the immediate need for new work is emphasized, whilst the intensity of the final result is often surprising.

The limits of each art seem to mentally concern him, however with his mixed techniques and the use of history and current affairs he proves that art always precedes aphorisms. Through Deep in the Forest we meet, Patsios proposes humorous choices, provocation, and political allusions with balance but also intensity, making his works anchor in the present and speak a contemporary language.

Konstantinos is the first artist I approached when almost a decade ago The Blender Gallery was born. He participated in our very first exhibition “Moments Of Becoming” in 2013 and ever since has been an indispensable piece of our artistic identity as a gallery. Extremely productive and in absolute control of where his artistic practice ought to take him at each stage of his career, Patsios never ceases to surprise me with new complete art series the visual language of which could be of no one else but his. He pairs humor and mockery with a deep knowledge of History and current affairs, and he is always deconstructing and simultaneously paying homage to old masters. I think he is an incredibly talented artist with a beautiful path ahead of him, so I am always proud and excited to present his new work.

Iason Theophanidis, Founder and Director of The Blender Gallery

I came across Konstantinos explicit work during my collaboration with Jason Theophanidis and The Blender Gallery. From the very first moment that I familiarized myself with his artworks and artistic oeuvre, I was absolutely impressed. His art is a way to envision and interpret life through enigma of dipoles: male and female, cause and effect , form and content. He manages to convey strong social and political messages through his body of work in a way that challenges the viewer to decipher the impulses that normality does not allow to emerge. I am really looking forward to working with Konstantinos and presenting his work in London, a city which is one of the most important centers of the contemporary art world and a global hub of fine art that will embrace and bring out the best of Konstantinos artwork.